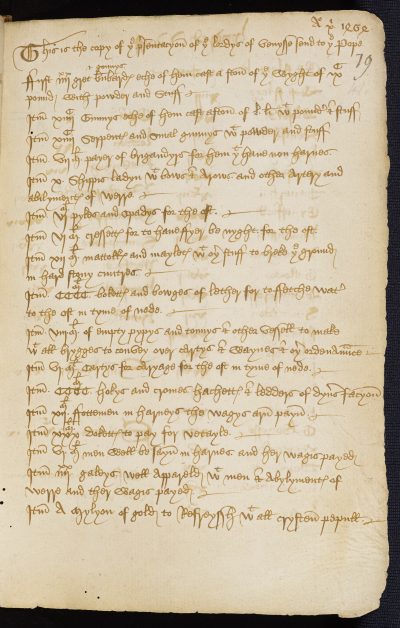 Glints of military power, papal ambition, international politics, vast wealth, and far-flung lands flash from a list entitled “This is the Copy of þe Presentacyon of þe Lordys of Venysse Send to þe Pope anno Christi 1464.” The list is preserved in two fifteenth-century collections of miscellaneous works in Middle English, Oxford, Bodleian Library Tanner MS 407 and Aberystwyth, National Library of Wales Brogyntyn MS ii.1. As its title in both manuscripts proclaims, the list details “The Gift” (“þe Presentacyon”) from the Lords of Venice to the Pope in 1464. The title in the Brogyntyn manuscript further notes that the Venetians’ largess was to aid the pope in some effort against the Turks (“geneste þe torke”). With this additional piece of information, we know that the list pertains to the Venetians’ promised support of Pius II (1405-64) in his cherished ambition to instigate a crusade that would restore Constantinople to Christian power, following its loss to the Turkish army led by Mehmet II in 1453. Having been unable to garner support or military leadership for the crusade from European rulers, Pius II decided in 1464 to lead the crusade himself, despite being in failing health. On June 18 of that year, he left Rome for the port of Ancona to sail thence with troops and supplies that had been promised by Hungary and Venice. As R. J. Mitchell explains, Hungary supported the crusade out of a real fear of the Turks invading its territory while Venice’s motives were more conflicted, its interest in protecting its trade relations with the Turks ultimately taking second place to its interest in maintaining  control over the Dalmatian coast, upon which the Turks were encroaching.[1]

The crusade was not to be, however, for, as Gordon Campbell tells it, the pope died just as “the Venetian galleys hove in to view”– precisely twelve galleys, according to his friend and biographer Giovanni Antonio Campani (1429-77).[2] What kinds of supplies had the Venetians loaded into those ships to support the pope’s military venture? According to our list, they had promised a great deal, including eighty galleys, not just twelve. The list follows, first in Middle English and then a Modern English translation:

Even with eighty galleys–plus ten “shippis”–it is hard to imagine all of this gear fitting into them, even if the six-thousand footmen arrived in Ancona by foot. But if reality fell short, the list itself would seem to succeed in casting the Venetians in the best possible light for posterity, snuffing out any memory of their belated and less than whole hearted support of the Pope’s effort. Concluding with the crescendo of “a mylyon of gold to refreyssh with all Crysten pepull,” it would even seem to respond specifically to a disparaging (if astute) remark about them in Pius’s autobiographical Commentaries: “They did not love the Christian religion so much as they feared the Turks.” At least they did love their fellow Christians, this final item implies. In this way, the list works as a kind of wish list for the Venetians, wishing themselves into a favorable light, at least in the eyes of readers not overly familiar with the facts on the ground.

Given those facts, that neither the pope’s longed-for crusade nor the Venetians’ munificence on the scale promised in this list ever materialized, how did the list find its way to the two men who inscribed it into their commonplace books, one living in the Norfolk village of Acle, the other living somewhere in Wales (the owners of Tanner 407 and Brogyntyn ii.1 respectively)?[20] We will likely never know the real, commonplace story of the list’s travels, but thanks to its presence in these books, we know that at least  it does have a story, unlike the only-imagined story of Pius’s reconquest of Byzantium. As a list that makes us aware that it has a history without revealing what it is, this list is similar to Michael Leiris’s list of “Imagerie africaine” (explored on Listology here). In the case of Leiris’s list, we were able to discern that there was more to Leiris’s “mental ‘ambience’” than his travelogue otherwise revealed; in this case, we catch a glimpse of these compilers’ interests in the news of far-away current events, including details of armaments, of soldiers’ gear, and of the wondrous gift to “all Crysten pepull,” and we become aware of a now-invisible network that brought such news their way.

[2] Gordon, Campbell, “Pius II,” in The Oxford Dictionary of the Renaissance (Oxford: Oxford University Press, 2003). Campini quoted in Mitchell, The Laurels,   265. A crusade had been Pius’s dearest held ambition ever since his election in 1453. For a thorough account see Mitchell, or for Pius’s own version of events, see his Commentaries, which are edited and translated into English in Memoirs of a Renaissance Pope: The Commentaries of Pius II, An Abridgment, trans. Florence A. Gragg, ed. Leona Gabel (New York: Capricorn Books, 1959).

[3] Edited by Cameron Louis, in The Commonplace Book of Robert Reynes of Acle: an edition of Tanner MS 407 (New York: Garland, 1980), 261. Brogyntyn MS ii.1 is completely digitized here; find this list on f. 194v. The list is edited from this manuscript in William C. William Marx, Manuscripts in the National Library of Wales (Llyfrgell Genedlaethol Cymru), Index of Middle English Prose Handlist XIV (Cambridge: D. S. Brewer, 1999), 26. Lists in Tanner 407 have already been studied on Listology, in “On Islands, Part 1” and “On Islands, Part 2.”

[4] “The earliest kind of cannon, usually throwing a stone ball or a very large shot.” This and all definitions are from the Oxford English Dictionary unless otherwise noted.

[5] Louis notes that “serpentinum” denoted a cannon, possibly so-called “from ‘serpentine’ gunpowder, which was the most commonly used firing substance in the Middle Ages (Commonplace Book, 462). Brogyntyn ii.1 specifies at this point that “small guns” are handguns (hondgonnis).

[7] “The defensive or body armour of a man-at-arms or foot-soldier.”

[10] “A vessel of iron or the like, made to hold grease or oil, or an iron basket to hold pitched rope, wood, or coal, to be burnt for light.”

[13] “A large container of definite capacity for storing solids or liquids, such as meat, fish, or oil.”

[14] “A large cask or barrel, usually for liquids, esp. wine, ale, or beer, or for various provisions.”

[20] For a summary of the evidence on the location of the production Brogyntyn ii.1 (olim National Library of Wales MS Porkington 10), see Auvo Kuriven, “MS Porkington 10: Description with Extracts,” Neuphilologische Mitteilungen 53 (1953): 33-67, at 37.