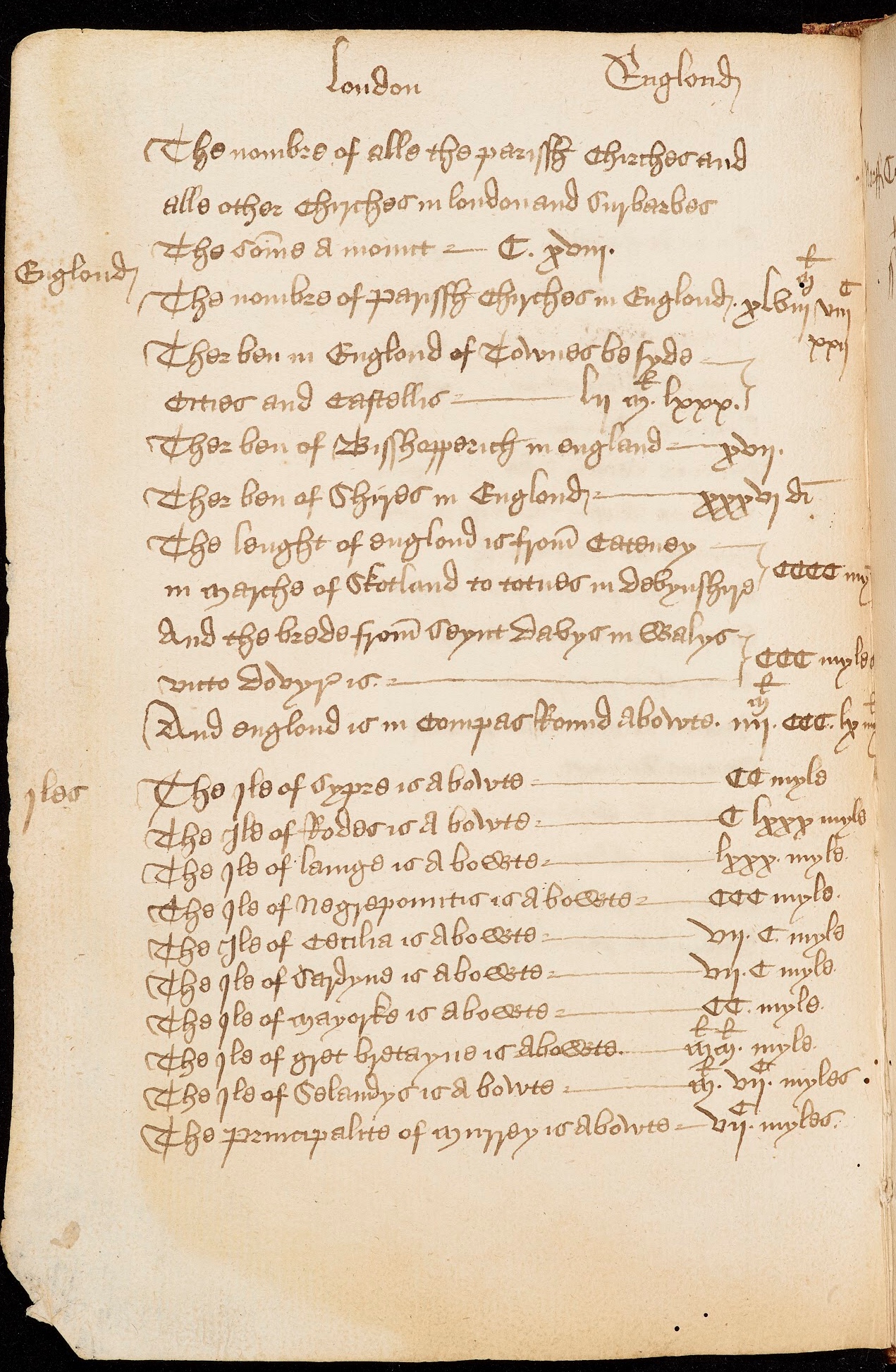 Sometime in the fifteenth century, one Robert Reynes of Acle of the county of Norfolk devoted a page in his commonplace book to two lists having to do with islands.[1] This post is about the first of those lists, which enumerates a series of facts and figures concerning Reynes’ native island, Great Britain. The second list, which I will take up in a separate post, situates Great Britain in a far-flung, list-conjured archipelago of illustrious isles. Together the two lists show off two opposing effects of the list form: the list of multiple islands is open-ended, inviting additions, while the one that focuses on the single island of Great Britain expresses completeness, implying that its contents are all one needs to know about the topic. That list reads as follows:

Englond
The nombre of parissh chirches in Englond xlviii ml. viii c xxii (48,822).
Ther ben in Englond of townes, besyde cities and castellis lii ml. lxxx (52,080).
Ther ben of bisshopperichs in England xvii (17)
Ther ben of shires in Englond xxxvi dimidium (36 and a half).
The lenght of Englond is from Catenay in Marche of Skotland to Totnes in Devynshire cccc myles (400 miles)
And the brede from Seynt Davys in Walys vnto Dovyr is ccc myle. (300 miles)
And Englond is in compas round abowte iiii ml. cccix myle (4,209 miles)

Closing with the phrase “And Englond is in compas round abowte,” this list invites us to picture the island of Great Britain as a whole, complete and all-encompassing, and further, to see this list itself as enclosing a set of statistics that describes Great Britain completely. In fact, with a closer look at it, we may note now that the part of the list devoted to England (as opposed to London) includes exactly seven items, a number that connoted totality during the Middle Ages.[2]

What about those statistics, though? 48,822 parish churches? Exactly 52,080 towns? George F. Warner and Julius Gilson were the first scholars to have remarked on this list, giving it the memorable title “mythical statistics.”[3] While most of the list’s figures are indeed more fiction than fact, its origin is no myth, for the English historian Ranulph Higden (c. 1280 – 1364) covered all of its data points on England in his world history, the Polychronicon.[4] Here, for instance, is some of the material for the first part of the list devoted to England in the Middle English version of Higden’s Latin text: “[England has] … six and thirty shires and a half, and towns two and fifty thousand and four score; parish churches five and forty thousand and two.”[5] Elsewhere Higden supplies the number of Bishoprics in England–seventeen, as in our list–and gives the length, breadth, and circumference of the island as well.[6]

In his Polychronicon, Higden not only provides these statistics but also enumerates the members of many of these categories. He lists all of the shires, all of the bishoprics, and many many towns and parish churches too. In this context, we may also recognize the items in the list in Reynes’ commonplace book as the titles of as many lists. Given that the towns and parish churches are so numerous as to be virtually innumerable, the “infinity of lists,” to borrow Umberto Eco’s title, stealthily reasserts itself, rendering “mythical” the idea that a list is ever truly closed.

To conclude this post on statistics, Listology has some facts and stats of its own, presented here in (naturally) the form of a list!
— This post marks the beginning of Listology’s second year.
— During our first year, we published 26 posts by 8 authors.
— In year two, we look forward to expanding the variety of our posts to include summaries of scholarly (and other) articles that have to do with lists and interviews with their authors.
— We will continue to welcome guest posts and hope our readers will consider contributing to the blog. See further details at the “Invitation to Participate” tab at this site.

[2]For a discussion of this meaning of the number seven, see the Listology post, “Seven Lessons from Mr. Rogers: A Listicle Review.”

3 thoughts on “On Islands, Part 1, and … Listology celebrates its first anniversary!”