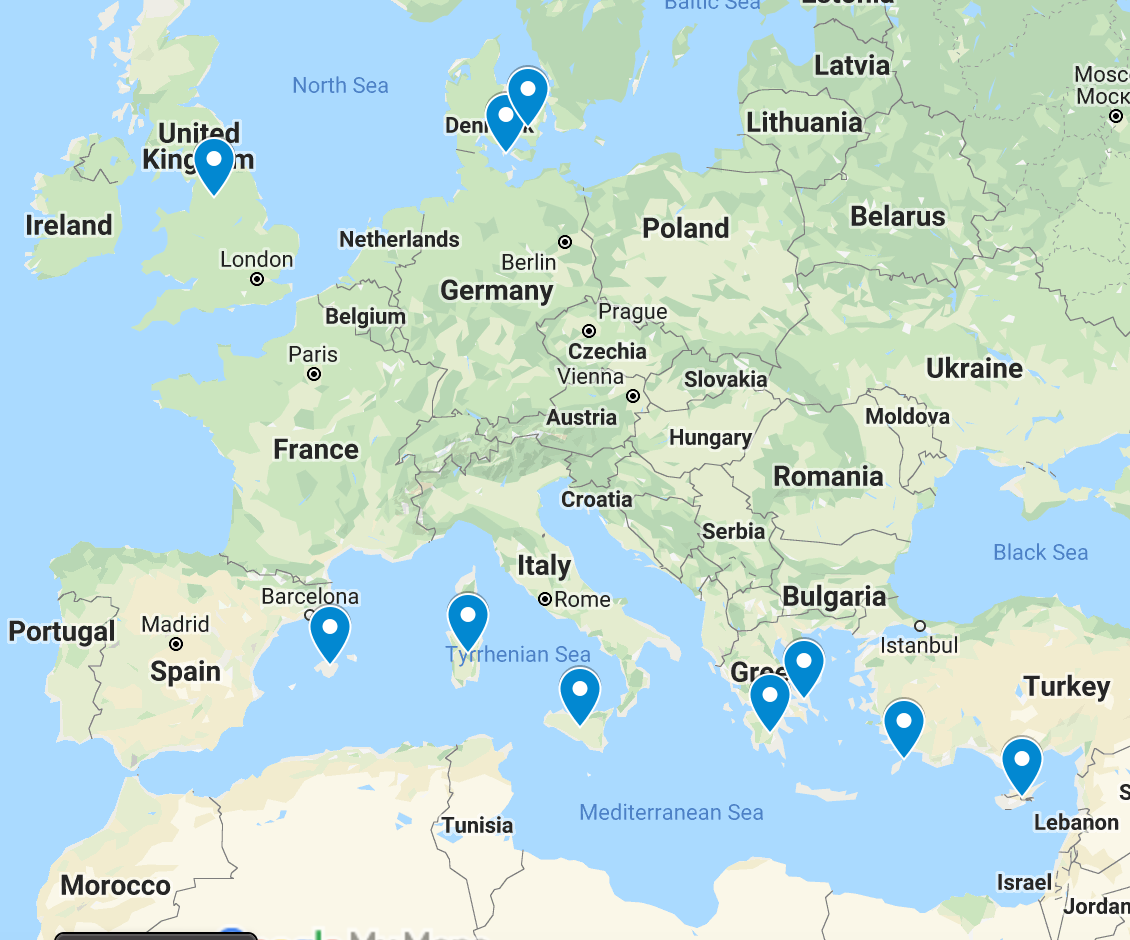 For an interactive version of the above map follow this link.

This post returns to folio 37v in Robert Reynes of Acle’s commonplace book, this time to consider the second of its two lists pertaining to islands. As I explained in my post last month, the first list on that page provides a series of statistics on the island of Great Britain, concluding with an entry specifying that it is “in compass round about 4309 miles.” With Great Britain’s circumference as its final entry, that first list created a circumference of its own, conveying the impression that it encompassed–or rounded up–all the essential facts about the island. Today’s list is also interested in the matter of an island’s circumference, for it enumerates a multitude of islands, supplying the circumference of each of them. Instead of contributing to a sense of the list’s completeness, though, the numerous circumferences in this list underscore the distinctness of any given list item in relation to the next.

From the point of view of listology, today’s list appears to collect islands randomly–with seven from the Mediterranean and three from more northern climes–and thus raises the question of whether it adheres to a certain principle of selection or represents a particular category of islands. We will probably never know why Reynes put these particular islands on his list, but a sampling of their lore suggests that for him any “random” list of islands could have comprised a list with its own kind of wholeness: a list as a cabinet-of-curiosities or, better yet, as a string of exotic beads, each one different from the other. The two ends of the list/string could be tied together to make a whole circular bracelet, but they could easily be untied as well, in order to add more beads.

How did Reynes come into possession of this collection of bead-like islands? He might have known of the nearby Danish islands of Langeland and Zealand because of their importance to the international textile business, which was so crucial to the welfare of his home island, Great Britain.[2] Most of the other islands he could have found in John Trevisa’s translation of Ranulph Higden’s Polychronicon, which contains the statistics on Great Britain that my post last month considered. The Polychronicon groups Mediterranean islands under the heading “De Insulus Maris Magni” [On the Islands of the Great Sea] and supplies fascinating details for many of them.[3] The island of Sardinia, for instance, is noted for its lack of snakes as well as for an herb that grows there that causes people to laugh themselves to death.[4] Equally wondrous are the island’s hot wells whose waters cause blindness in thieves. If Sardinia is famed for its natural wonders, Cyprus, the island that heads up Reynes’s list, is known as the site of human inventions: according to the Polychronicon, it is where brass was first made and its wine “is the strengest of all wynes.”[5]

Given the illustriousness of these and the other distant iles on Reynes’s list, it would seem odd that the list includes Great Britain, Reynes’s native soil. But from the point of view of a whole list of scholars, poets, and geographers dating from antiquity, Britain was arguably the most wondrous of all the islands on Reynes’s list. Higden, for instance, devoted many chapters in his Polychronicon to Britain while numerous other writers gave it the distinction of being a mystical “other world.” We find a powerful example of this idea in the writings of third-century theologian Origen: in a homily on the Gospel of Luke he writes, “The power of the Lord and Savior is with those who are in Britain separated from our world.”[6] In his Etymologies,Isidore of Seville (560-636) captures the special place Britain held in the medieval imagination by putting it at the top of his list of islands, distinguishing it as “the best known and the biggest, which many of the ancients investigated with expert effort.”[7] Interestingly for our list’s attention to  circumferences, Isidore goes on to note that Britain “is an island in the Ocean, cut off from the whole globe by the intervening sea” Sur-rounded by the sea, Britain is the paradigm of an island as an orb unto itself.

If the essence of an island is to be separate–”compassed about with the sea,” as an early modern writer put it–perhaps that is why any individual island can be so distinctly wondrous and why, in turn, any apparently random list of them is marvelous in its diversity.[8] In this way, we might understand Reynes’ list of islands to have been guided by the principle of islandness multiplied, which produces, in turn, a list that coheres by virtue of its marvelous miscelleneity.

[1] List transcribed from Lewis Cameron, The Commonplace Book of Robert Reynes of Acle: An Edition of Tanner MS 407 (New York: Garland, 1980) with his modern place names inserted in square brackets.

[2] “Seland” is mentioned in the late-fifteenth-century poem “The Libel of English Policy” as a producer of the dyestuffs  “madere” and “woade.” The poem is edited in Thomas Wright in Political Poems and Songs Relating to English History (London: Longman, 1861), pp. 157-183, at 180.

[8] In his “newly corrected, enlarged, and appended” version of John Trevisa’s translation of Bartholomaeus of Anglicus’s De proprietatibus rerum, Stephen Batman defines an island as “a land compassed about with the sea, or with a river, or with a water, as it were set in the sea.” See Batman vppon Bartholome his booke De proprietatibus rerum (London: 1582), Bk. XV, ch. 82.

This is a text widget, which allows you to add text or HTML to your sidebar. You can use them to display text, links, images, HTML, or a combination of these. Edit them in the Widget section of the Customizer.