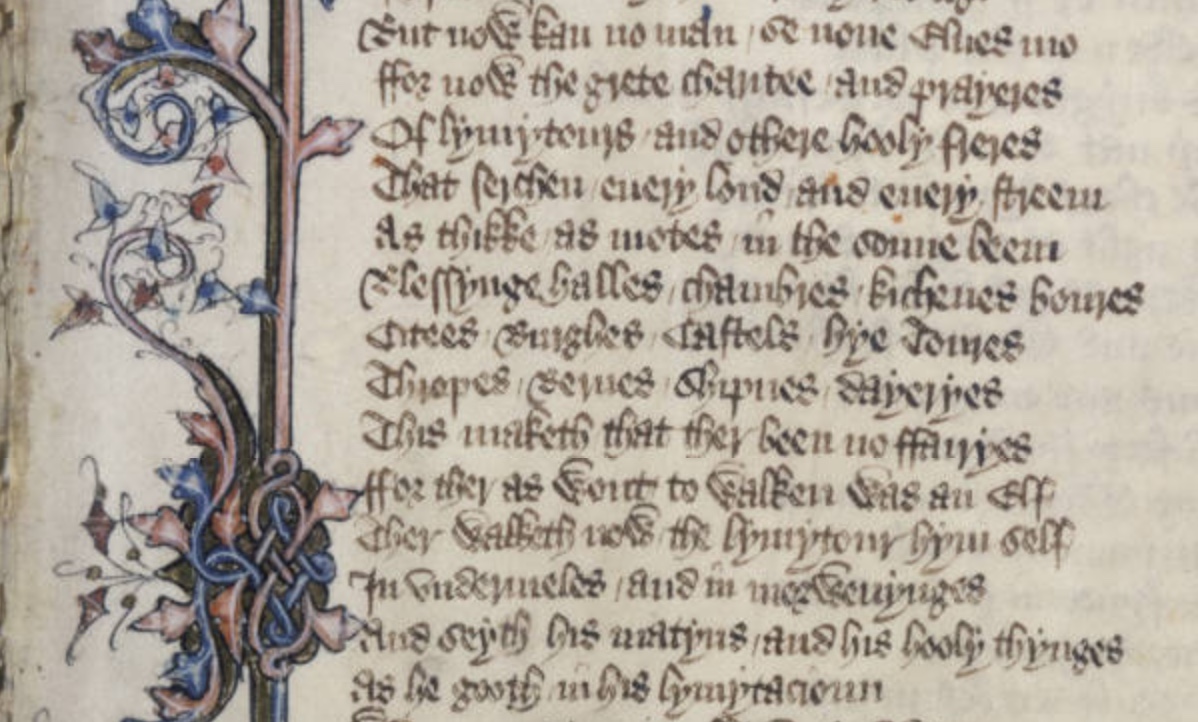 As she begins her tale, Chaucer’s Wife of Bath waxes nostalgic about the olden days in Britain, when King Arthur reigned, the Elf Queen and her “joly compaignye” danced in “many a grene mede,” and all the land was “fulfild of fayerer” (‘fully filled with fairy’).[1] Going on, the Wife laments that there is nary an elf to be seen these days–“now kan no man se none elves mo”– thanks to the multitudes of friars who now pervade England “as thikke as motes in the sonne beem” (as thick as specks of dust in a sunbeam).[2] It is the friars’ “grete charitee and prayers” that have caused the elves to vanish, for they have spread out over the land,

While it is the friars’ blessing that shoos away the fairy creatures, it is Chaucer’s list of the sites of that blessing that conveys the completeness of the friars’ activity, not only through the number and variety of spaces it lists–from bedrooms to towers– but also through the space the list occupies on the page (see above). As Stephen Barney has remarked of this list, “friars fill space like a catalogue.”[5] Put another way, the friars’ thickness on the ground in medieval England is analogous to the density of words for spaces on the page.

To the extent that these “words for spaces” could also be termed “names for spaces,” Chaucer’s list also correlates the friars’ busy blessing with the Christian rite of baptism, that ceremony in which a person, traditionally a child, is adopted by the church and given a name. Viewed in the light of this ceremony, we can see that by way of his list of names for spaces, Chaucer depicts the friars’ Christianizing–or christening–of the land as a matter of naming its spaces, thereby adopting them as Christian, rather than elvish, places and spaces.

Whatever the friars’ blessing entailed exactly, it would have been conducted in Latin, the language of the church. Friars would have acquired their competency in Latin the same way Chaucer’s readers acquired theirs, through the medieval grammar school curriculum, which featured Latin texts at all levels, beginning with teaching young scholars how to read. Though not a sacred rite like baptism, learning Latin was nevertheless a kind of linguistic christening, for it was a prerequisite to becoming a literate Christian.

Thanks to his readers’ early education, Chaucer’s list of all the spaces the friars Christianized may have prompted them to recall a certain form of “ritual text” that they would have encountered in their own passage into literacy: a nominale. In essence a Latin-English vocabulary list, a nominale was a long long list–consisting in some cases of over a thousand entries–of nouns (and some adjectives) given in Latin and English.[6] The evidence of two fifteenth-century nominales hints that in Chaucer’s list of spaces, medieval readers might have recognized both names of categories of words in nominales as well as clusters of words within categories.[7] Halls, chambers, and kitchens all appear as subheadings in these texts, while the words hall, chamber, kitchen, and “shypne” (stable) all appear in close proximity to each other in the category of things pertaining to houses; and the words castle, tower, hall, and chamber appear together in the category of words pertaining to things of the church.[8]

Interestingly, the two late-medieval nominales considered here do not include words for elvish creatures though an Anglo-Saxon glossary does, listing munt-aelfen, wudu-elfen, feld-elfen, wylde-elfen, sae-elfen, and dun-elfen as translations for Latin oreades, dryades, moides, hamadryades, naieades, and castalides, respectively.[9] Could it be, then, that grammarians were busily banishing elves from glossaries around the same time Chaucer was writing about friars scouring them from the English countryside? With this question in mind, we may note that before the Wife of Bath declares that the friars’ activity “maketh that ther been no fairyes,” she says that one no longer sees fairy creatures, “now kan no man se none elves mo.” Given that an inability to see a thing does not rule out its being there and, further, that it is hard to see a thing for which one does not have a name, we might conclude that at least in the world of the Canterbury Tales, elves and other fairy beings still existed even though they were invisible within its latinate, Christian power structure. Yet the Wife of Bath’s Tale itself names and remembers these native creatures, just as the list of spaces the friars bless could have recalled to readers’ minds the native English side of a Latin-English vocabulary list.

[4] Modern English translation from “The Wife of Bath’s Prologue and Tale” at Harvard’s Geoffrey Chaucer’s Website, The President and Fellows of Harvard College, 2018.

[7] The nominales considered here are preserved in London, British Library MSS Royal, 17.C.xvii and Additional 34276. They are edited by Thomas Wright in A Volume of Vocabularies (Privately printed, 1857), as “An English Vocabulary” and as “A Nominale.”

[9] The glossary is the so-called “Supplement” to Alfric’s Glossary, which is preserved in Oxford, Bodleian Library MS Junius 11 (“The Junius Manuscript”); I quote from the edition of the “Supplement” in Wright, A Volume, 49-69, at 60.