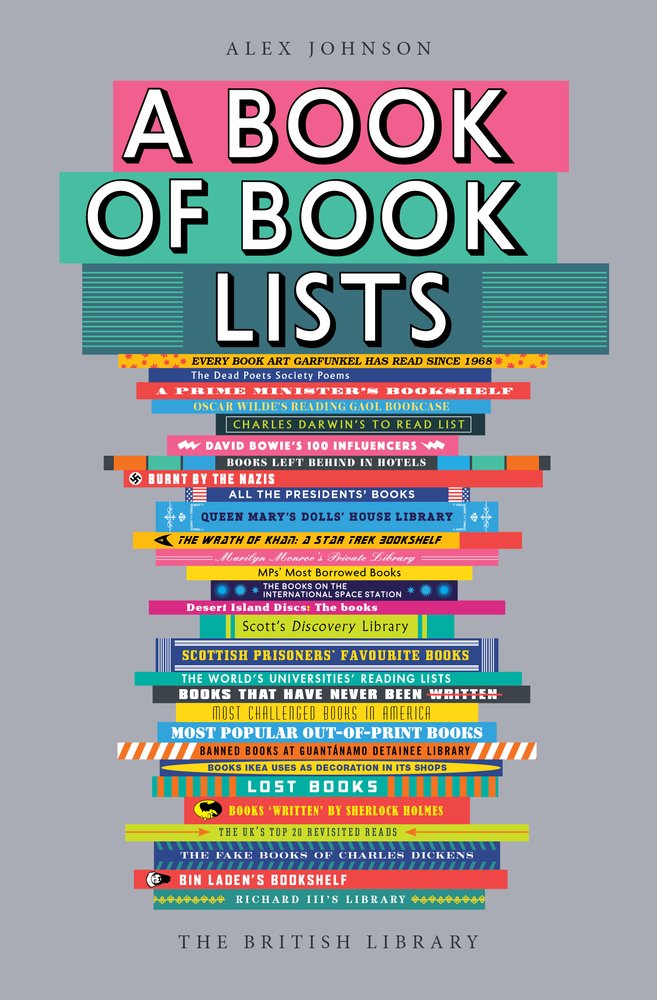 Alex Johnson’s A Book of Book Lists is a treasure hoard of reading lists, lists of books to read and lists having to do with reading. It contains to-read lists, inventories of bookshelves, collections of library slips, and book recommendations by writers, pop stars, presidents, and terrorists; there are prospective, fictional, metaphorical, and impossible reading lists. We learn from a list of possible titles F. Scott Fitzgerald drew up that we might have known the story of the ‘Great Gatsby’ as Among Ash-Heaps and Millionaires, or The High-Bouncing Love. There are many surprising finds: Marilyn Monroe’s private library contained an edition of Elizabethan plays. Queen Mary owned a doll house that had a library, which featured works only written for this specific usage, such as Poems: Abridged for Dolls and Princes, by Robert Grave. Art Garfunkel keeps a list of every book he has read since 1986 (https://www.artgarfunkel.com/library.html). The most recent one (entry 1299, from 2019) is Margaret Atwood’s Handmaid’s Tale. Oscar Wilde’s Reading Goal bookcase included The Prioress’s Tale by Geoffrey Chaucer (why exactly this one, I wonder, of all the Canterbury Tales?), Goethe’s Faust, and a paperback on Egyptian Decorative Art by W.M. Flinders Petrie.

Johnson’s book is pleasurable because it offers glimpses into people’s lives and minds through that which they have (or claim to have) read. Aren’t we all what we have read? Show me what you have read – especially in your formative years but also later on – and I will tell you who you are. At the same time, it is virtually impossible to keep track of the mass of books one could or should read. Reading lists of books takes away the pressure of having to work one’s way through hundreds and thousands of pages; it is a meta-reading that only scratches the merest surface of the actual works. And yet, there is something intimate about reading book lists; the titles hold the promise of providing access to so many different worlds, they tease you to open them, to go look for them and see what they are about… Also, and perhaps more immediately so, they give you the comforting and somewhat superior feeling of being part of a literary culture when you recognize a title or an author, or remember reading a particular book here and there.

Beyond lists of books (as physical objects) and the intrigue and pleasure they spark, lists of literary works in general lend function to lend prestige, to maintain established categories, and to create new ones. The literary canon, after all, is a list of the supposedly greatest poems, plays, or novels ever written. Similarly, the items assembled in anthologies of literary works, collections of poetry and short stories, ‘the best children’s poems of all times’ and the like function just like a recommended reading list. While such lists of literary texts use the list structure to create systems of order that are above individual works, there are also lists in literary texts, which often defy systems of order as they are intimately tied in with an individual text’s context.

In order to celebrate the richness of lists in literary works, what would be more fitting than starting a list of lists in literature? We have just created a new header in our blog under which you can find the beginning of such a list of lists in literature. In chronological order, we list literary works that feature one or more notable lists. It does not claim comprehensiveness (yet?); it is a work in progress and a collaborative effort. We invite you, our readers, to send us your finds of passages – no matter the literary genre, period, or language the text was written in. The aim is to provide a resource for anyone who is interested in reading or not reading lists, in losing themselves in the meta-list, or in researching them. And no doubt – and perhaps most surprisingly – the length of the list will bring to our attention the sheer mass of lists in literary texts across time, place, and period!