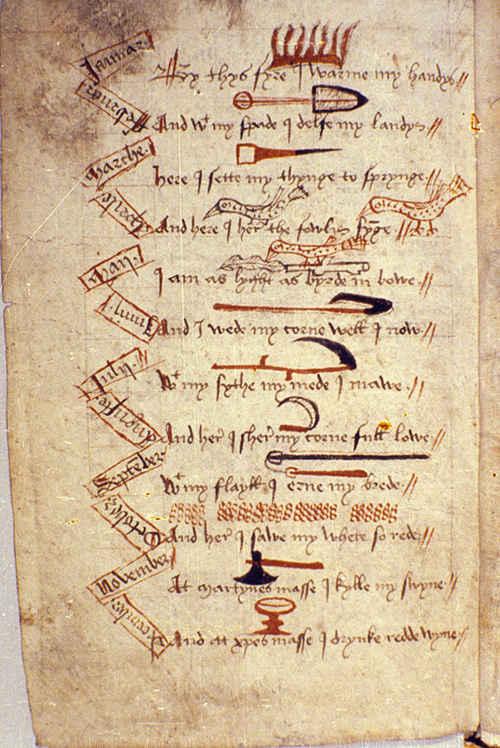 The photo above is of a page in Oxford, Bodleian Library Digby MS 88, a fifteenth-century collection of miscellaneous texts in English and Latin on astronomy, medicine, divination, and theology.[1] The short, untitled work occupying this particular page creates a curious first impression. With its alternating lines of text and drawings and the zig-zag arrangement of red ink rectangles along its left margin, it looks at first glance as if it might be a rebus, one of those puzzles in which words and phrases are presented in a combination of letters and pictures. A closer look reveals that the work is not a rebus in the sense of a puzzle, but the Latin sense of the word “rebus”–“by means of things”–does apply, for what we see here is a poem structured by three lists: a list of the months, given in the boxes along the left margin; a list of the typical occupations of each month, given in twelve rhyming lines in the voice of a first-person narrator; and, in pictures, a list of the things by means of which that narrator carries out the activities he lists. [2]

The following is an edition of the poem from this manuscript.[3] The bracketed words at the ends of lines are my own, designating the pictured items. Those in bold are not cited in the text.

Comparing this edition to the photo above, it is immediately clear that it is missing something: the pictures that comprise one of the poem’s three lists. In fact, none of the five printed editions of this poem supplies any semblance of the drawings in the manuscript and most do not even mention that it has them.[5] But perhaps five different editors left out the images with good reason? After all, even when an implement is not mentioned in the text, it is implied. Sowing wheat entails seeds; slaughtering a pig requires something like an axe. What do the pictures really add? What work do they do?

The placement of the drawings between the lines of text suggests that they function in the manner of interlinear glosses, which supply synonyms for especially important words. In this case, the synonyms are given as pictures. And just as verbal glosses both point out key words and ensure their being understood, the pictorial glosses in this poem both highlight the necessity of the implements for the narrator’s work and play and clarify their meaning for the reader. In this regard, the poem also requires some interpretive work on the part of that reader to match the poet’s artistic production. Since only six lines of the text actually include the word for the item drawn above them, the remaining six require readers to supply those pictorially glossed terms themselves. Recalling the Latin sense of “rebus,” the poem asks viewing readers to supply those terms by means of the things pictured above their lines of text: for instance, to supply the word “sickle,” as the necessary tool for August’s work of cutting corn (i.e. wheat or barley or rye).[6]

As a reader engages with the drawings in this way, he becomes a co-author of one of the lists upon which this poem is structured, which happens also to be the part of the poem that pertains most to tangible things. It is thus by means of its things that this poem in words and pictures connects viewing readers both to the producers of this poem (the poet and scribe, who likely also drew the pictures) and to the world the first-person narrator creates.

In this way, this fifteenth-century poem calls to mind the effects of other lists of things discussed in Listology posts. The expense items in Namwali Serpell’s Short Story “Account,” presented readers with the pleasurable task of producing the story that incurred them while Lulah Elander’s grandmother’s lists of things transported readers into the everyday circumstances of her life. Even lists that seem to be about other topics often boil down to lists of things, an idea we invite our readers explore in Listology‘s lists and in their own.

[1] Find a description of the manuscript along with a link to nine additional images from it at Medieval Manuscripts in Oxford Libraries, s.v. MSS Digby. https://medieval.bodleian.ox.ac.uk/.

[2] For an introduction to the “typical occupations of the months,” see the Listology post “Two Lists in Honor of Labor Day.”

[3] Douglas Gray, The Oxford Book of Late Medieval Verse and Prose (Oxford: Clarendon, 1985), 131. The poem comes down to us in one other manuscript, London, British Library Add. MS 22720, where it is incorporated into a calendar, with each verse appearing on the calendar page for its month.

[4] According to the Oxford English Dictionary, a dibble is “[a]n instrument used to make holes in the ground for seeds, bulbs, or young plants. In its simplest form, a stout pointed cylindrical stick with or without a handle” (OED, s.v. “dibble,” n. 1). Find another image of one of these devices for setting plants at Wyrtig: For gardeners with a sense of history, S.E.S. Eberly, 2018.

[5] Gray goes furthest in describing the page layout: “The verses are accompanied by crude emblematic illustrations above each line (representing a fire, a spade, a bird on a bough, etc.)” (444). In the notes to his edition of the poem, Rossell Hope Robbins writes, “the verses are attached to miniatures portraying the appropriate occupations in a Calendar.” See his Secular Lyrics of the XIV and XVth Centuries, 2nd ed. (Oxford, Clarendon, 1955), 246. For bibliography on the other editions of the poem, see Digital Index of Middle English Verse, s.v. DIMEV 944.

[6] In Middle English, the word “corn” denoted, among other things, “[a] species or variety of cereal plant or grain” (see the Middle English Dictionary, s.v. “corn,” sense 3a).

3 thoughts on “A list on the work of things”