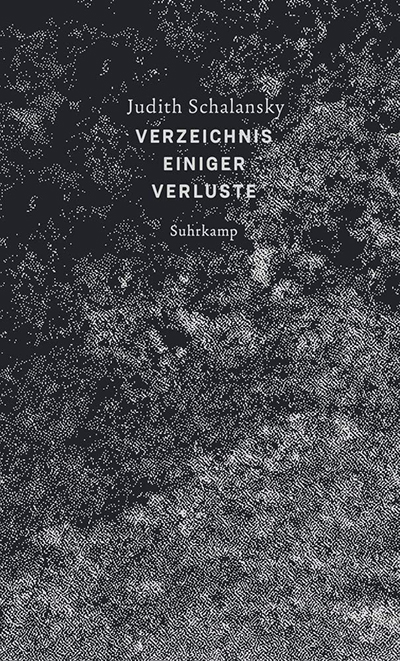 The seemingly unremarkable nature of Judith Schalansky’s Inventory of Certain Losses begins with its cover: a black background broken up by tiny white dots that resemble pixels, spread unevenly across the surface. It seems unruly, dark, sad. The title is as unremarkable as the cover: Inventory of Certain Losses. This is the literal translation of the original German title, Verzeichnis einiger Verluste, which was published in Germany in 2018 and is currently being translated into various languages, including English.[1] The author, Judith Schalansky, has won much critical acclaim for both her writing and graphic design. As an inventory, the book assumes a rather unappealing form of a list-like structure. What, a prospective reader might ask,  could be less captivating than a list of things? An inventory sounds dull because it evokes bureaucratic practices, strict principles of order, and a lack of emotionality. Some of these expectations are met: the book is strictly ordered, with sixteen pages for each chapter and twelve chapters that represent the year’s twelve cyclical months. To mark the beginning of each chapter, a seemingly black page is inserted. If one looks closely, however, the black pages reveal images, their visibility clouded by a reduced contrast between the image and its background. Thus, the images introduce the subjects of each chapter: items that are only present in memory. Presence and absence, visibility and invisibility become an integral part of the visual aesthetics of the book. The hidden images show what the chapters tell: absences can be made visible again, losses have left their traces, and that which seems to have disappeared forever may still have its place in our memory, be it individual or collective, and can be conjured up and remembered – not least through the power of literature.

The book’s twelve chapters enumerate twelve things no longer extant: among them, there is a sunken island in the Pacific, an extinct species, a painting that was lost in a fire, a movie that was never made, and the lost poems of Sappho. The poetic principle that underlies the book as a whole, then, is that of the list. Each chapter begins with an asterisk and cross that demarcates the start of an almost encyclopedic entry: this prefatory material specifies the place, animal, object, or person in question and briefly provides its key details of ‘birth’ (when it came into existence or was made) and ‘death’ (when it got lost or extinct or sunk or burned or fell into oblivion). The chapters also list spaces: the running headings of each chapter identify its main setting. This list opens up a whole panorama of places and spaces, ranging from the Cook Islands to ancient Rome and the Lacus Luxuriae, a lake on the moon. Additionally, the chapters present a list of  literary styles – there is a classical short story, an academic report, stories told from a fictional first-person perspective, and chapters in which the narrator’s ‘I’ is very much present, sometimes as passive observer, sometimes as protagonist. Taken together, the twelve chapters produce inventories of inventories, accumulating a variety of listed items in a variety of list forms.

Ultimately, the lists of lists encapsulate sundry subjects and styles in a finite form that reflects the whole book’s topic: that life is finite and the world transient. The list-form provides the perfect counterpart to the seriousness and potential sadness of the topic. The enumerative forms of the inventory and the encyclopedic that structure the chapters in Schalansky’s book signal order, strict rules, and thereby a sense of safety in a world that seems to be chaotic and meaningless. Lists give meaning to chaos. Umberto Eco once said poignantly in an interview that “we like lists because we don’t want to die”.[2] Lists have the capacity to convey the impression of infinity. One can always add something else to a list and with each new item we are writing against the inevitable finiteness of our lives. This illusion of continuity in the face of the discontinuous and broken makes lists so powerful. They allow us to collect and recollect. Thus, it is small wonder that many of the chapters in Schalansky’s book deal with practices of collecting and feature characters that are collectors. ‘Collecting’ and ‘recollecting’ go back to the Latin verb legere, which means both ‘to read’ and ‘to collect’: reading becomes an activity of putting together ideas, of ‘collecting’ things and becoming a springboard for our memories and recollections. Schalansky admirably makes this obvious when she connects personal losses and world losses in her inventory. The list becomes the key method in her undertaking – it emerges as a poetics of enumeration that powerfully undermines the losses that are being described because the list form relates to extrapolating and recording a finite label, a stable signifier for transitory experiences. According to Schalansky’s inventory, the fragmentary, broken, and finite nature of life can become bearable as long as we hold on to the form of the list – it allows us to make the invisible visible, the lost found again, and the forgotten remembered.